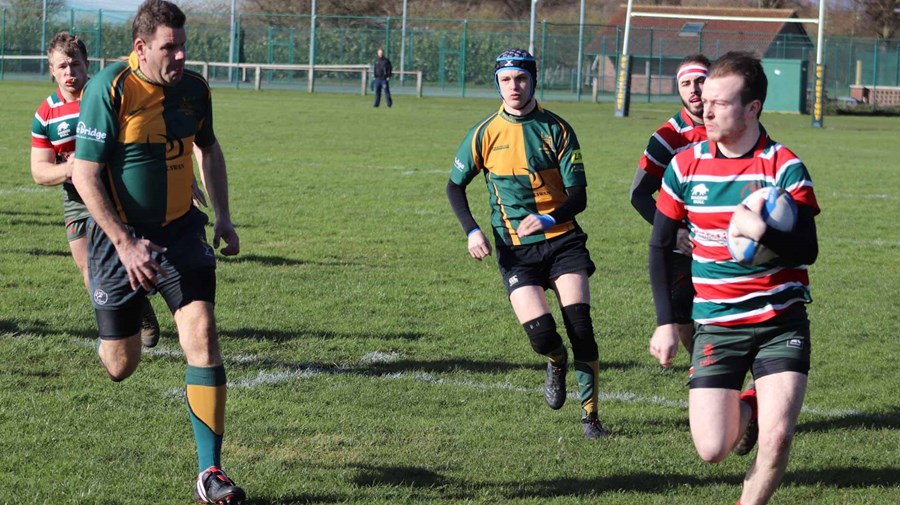 Kodi Strand and George Pomfret both crossed for hat-tricks as a combined Lincoln Imps and 3rd XV claimed a thumping 78-0 win at Horncastle.

Lincoln opened the scoring when Hogan picked the ball up from the scrum and beat the first man, before offloading for Brodrick to score a try in the corner.

The visitors soon increased their lead when Jones sent a kick through and Keeton scooted from the ruck to go over for a try, with Jonny Richardson helping to drive him over. Brodrick successfully slotted over the conversion.

Fast hands down the line saw Brodrick hit a flat pass and sprint past two defenders to cross for his second try of the afternoon.

Lincoln’s confidence in attack continued as Hogan picked up the ball from the bottom of a ruck and stepped two players to score a try, which Brodrick converted.

Hat-trick hero Strand got his first try of the afternoon when Jones forced a knock on from a kick and chase. The ball was then passed to the wing for Strand to run in to score.

An impressive move in the centre by Lincoln set up a two on one - Brodrick drew in the defender before passing for Strand to run in for an easy try.

Lincoln’s other hat-trick hero Pomfret finished the scoring in the first half. The forward stepped one tackler and powered through to run in for a try to give Lincoln a 39-0 lead going in at the break.

Lincoln didn’t rest on their laurels and showed no signs of slowing down the pace in the second half.

After turning over the ball, Laws picked it up at eight and handed off the Horncastle flanker, before stepping the opposition winger to run in for a try.

A crossfield kick from Miles set up the next score of the match, which Pomfret pounced on to dive over for a try, which Brodrick converted.

Strand completed his hat-trick when a kick return created an overlap and Keeton miss passed it for the winger to go over for a try.

Another treble soon followed as a tap and go set up Pomfret to run past three players for his hat-trick try.

Lincoln made it 12 tries for the afternoon when Miles ran a meerkat ball off the first phase, looped round and reclaimed the ball back from Andy Price. Miles then dummied past one and handed off two more to run in for a great try.

Lincoln got fast ball out from a ruck before it went through the hands of Miles and Adam Kelleher, who offloaded for Jones to dive over for a try in the corner.

The visitors weren’t finished yet and managed to score another try with the final play of the match.

The ball was bobbled out from a ruck on the halfway line and Jones ran forward. Miles ran round the outside of Jones to create a two on one, with the latter dummying a pass and sprinting through the gap to go over for a try under the posts.

Brodrick successfully slotted over the conversion to complete an emphatic victory for Lincoln.

After the match Lincoln Imps XV captain Luke Brodrick said: “For the first 20 minutes the lads played very good structured rugby and got a couple of early tries.

“We then started to lose a bit of structure which made the game difficult for us at times, but overall it was a good performance from everyone who put in a huge effort.”