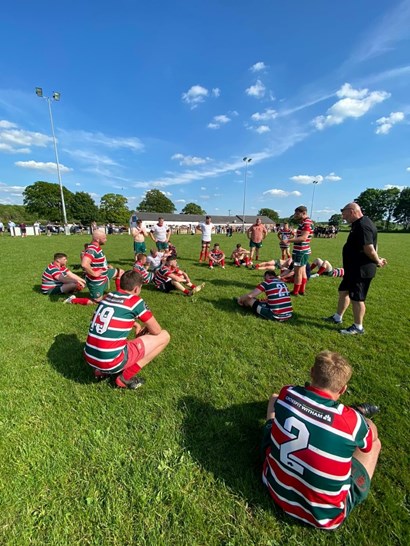 Scotty Edmed crossed for his first two tries for the club, but was unable to prevent Lincoln’s opening NLD Cup group game ending in a narrow 32-26 defeat at Kesteven.

Captain Lewis Wilson and Ben Sykes grabbed a try apiece for Lincoln, who beat Kesteven 47-14 when the two sides met in a friendly match last month.

However, it was the hosts who emerged victorious at Woodnook this time thanks to tries from captain Gavin Purvis, Harvey Fuller, James Goodrich, Tom Wood and Dan Turner.

Before the match a minute's clap was held to pay tribute to Kesteven's Andrew Sheardown, 'little' Andy Clarke and Paul Woods, who all sadly passed away in recent months.

Lincoln started strongly and opened the scoring inside three minutes. Jack Noquet made a great break from his own 22 and, with the help of support play down the left-hand side, Edmed went over for a try in the corner.

Kesteven hit back five minutes later when Purvis, who was making his comeback from injury, received a pass from the left around 10 metres out. The prop spotted a gap before powering through a tackle and going over for a try.

Lincoln regained the lead when Wilson ran from midfield, all the way through for a try under the posts, which Richie Dixon converted.

Kesteven, who are coached by former Samoa international Freddie Tuilagi, reduced the deficit to just two points when Fuller took advantage of some poor defending to run through three tackles to score a try.

The hosts then edged in front when James Goodrich went over for a try in the left-hand corner.

Lincoln responded with Edmed crossing for a try in the right-hand corner, which Dixon converted to give the visitors a narrow 19-15 lead going in at the break.

Lincoln increased their lead within 10 minutes of the restart when Sykes made a great break from outside the 22 to run in for a try under the sticks. Dixon successfully slotted over the conversion.

Kesteven refused to give up and took control of the final 20 minutes of the match. Tom Wood crossed for a try before Liam Shields added a conversion and a penalty to reduce the deficit to just one point.

Lincoln mounted a few late attacks to try and snatch victory, but unfortunately a combination of mistakes and good defending by Kesteven ensured it was the hosts who moved top of the group.

Lincoln’s next group match will see them host Mellish on Saturday, June 12.

Lincoln’s Director of Senior Rugby Ross Tarnowski said the result was “a bitter pill to swallow” for his side.

He said: “It was not how we wanted to start the NLD Cup competition and to give up the lead we had built was a bitter pill to swallow.

“We will chalk up Saturday’s performance as a bad day at the office. We now have next week to turn things around as a squad.

“There were some real positives to take away and our attacking shape and lines were very good for large parts of the game. However, our defence was too narrow and we were counter rucked far too many times with slow breakdown play.”

Lincoln captain Lewis Wilson added: “It was a bad day at the office and we will be looking to put it right next week. Thank you to Kesteven for hosting us.”

Kesteven captain Gavin Purvis was proud of his team’s efforts against a side from a league above them.

He said: “It was good to see the team executing the systems and moves that we have been working hard on in training.

“On a hot day the game was played at a fast pace which suited Kesteven.

“Lincoln kept edging ahead until midway through the second half. Kesteven grabbed hold of the game and took the lead.

“It was a strong team performance with some very good passages of play.

“We still have plenty to work on, but to beat a team from the league above is very pleasing and shows the squad’s progress over the last few weeks.”