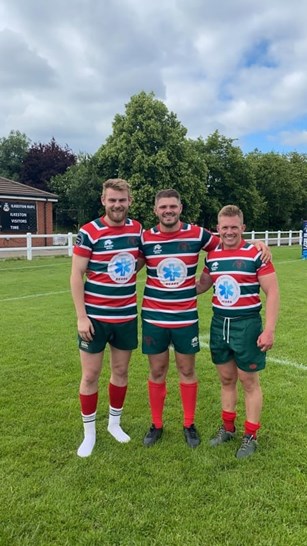 Captain Lewis Wilson crossed for a try to stifle Ilkeston’s attempted comeback as Lincoln’s 1st XV won 28-24 in the first leg of their NLD Cup Final clash in Derbyshire.

The result means that Lincoln will take a slender advantage into the second leg, which will be played at their home ground of Longdales Park on Saturday, July 3.

Lincoln started the game strongly and opened the scoring after just seven minutes. A quick tap and go from Noquet set up Cowe, who ran a good hard line to power over for a try in the left-hand corner. Dixon added the extras.

The visitors increased their lead after 14 minutes when Noquet ran straight through a gap from a lineout. He then dummied past one player and stepped inside before running in for a try, which Dixon converted.

Lincoln were in confident mood and added a third try shortly before the half hour mark. After being awarded a penalty on the five metre line, Matt Keeton ran an excellent line to storm over for a try.

Dixon once again slotted over the conversion to maintain his 100% kicking rate for the afternoon.

Lincoln winger Cynyr Jones appeared to have made a try-saving tackle, but was given a yellow card for allegedly having his hands in the ruck.

Ilkeston took advantage from the resulting penalty to go over for a converted try and reduce the deficit to 21-7 going in at the break.

The hosts cut the gap in the score to just nine points with an unconverted try early in the second half.

An Ilkeston player danced through three tackles before Lincoln felt there had been a knock-on.  It wasn’t given and, while Lincoln were distracted, their opponents picked the ball up to go over for a try under the posts.

There was just two points separating the sides when Ilkeston went over for a converted try. This could have caused concern as Lincoln lost a three-try lead against Ilkeston in the away league fixture last season, but this time they showed great character and defended excellently to ensure they were the winning side.

Lincoln increased their lead when Matt Walker offloaded the ball to Wilson, who ran a hard line and broke through one player before dummying his way beyond the full-back for a great try.

Louie Cooke took the conversion in the absence of Dixon, who was forced off with a knee injury, and he successfully kicked it over to give Lincoln a nine point lead.

Ilkeston tried to fight back with a try in the right-hand corner, but Lincoln held on for the win to give them confidence ahead of the home second leg.

Lincoln’s Director of Senior Rugby Ross Tarnowski said: “It was a great performance to come away from home and get the win.

“We have a few injury concerns ahead of next week’s second leg of the final, but the squad can take confidence from this in how we stuck to our structure.

“Great defence in the last 20 minutes and a super captain’s score to close out the game.”

Captain Lewis Wilson said: “It was great to see us finish strong defensively. When we played our patterns we looked dangerous. It was a good performance from the whole squad.”